UUIDs are a popular identifier data type – they are unpredictable, and/or globally unique (or at least very unlikely to collide) and quite easy to generate. Traditional primary keys based on sequences won’t give you any of that, which makes them unsuitable for public identifiers, and UUIDs solve that pretty naturally.

But there are disadvantages too – they may make the access patterns much more random compared to traditional sequential identifiers, cause WAL write amplification etc. So let’s look at an extension generating “sequential” UUIDs, and how it can reduce the negative consequences of using UUIDs.

Let’s assume we’re inserting rows into a table with an UUID primary key (so there’s a unique index), and the UUIDs are generated as random values. In the table the rows may be simply appended at the end, which is very cheap. But what about the index? For indexes ordering matters, so the database has little choice about where to insert the new item – it has to go into a particular place in the index. As the UUID values are generated as random, the location will be random, with uniform distribution for all index pages.

This is unfortunate, as it works against adaptive cache management algorithms – there is no set of “frequently” accessed pages that we could keep in memory. If the index is larger than memory, the cache hit ratio (both for page cache and shared buffers) is doomed to be poor. And for small indexes, you probably don’t care that much.

Furthermore, this random write access pattern inflates the amount of generated WAL, due to having to perform full-page writes every time a page is modified for the first time after a checkpoint. (There is a feedback loop, as FPIs increase the amount of WAL, triggering checkpoints more often – which then results in more FPIs generated, …)

Of course, UUIDs influence read patterns too. Applications typically access a fairly limited subset of recent data. For example, an e-commerce site mostly cares about orders from the last couple of days, rarely accessing data beyond this time window. That works fairly naturally with sequential identifiers (the records will have good locality both in the table and in the index), but the random nature of UUIDs contradicts that, resulting in poor cache hit ratio.

These issues (particularly the write amplification) are a common problems when using UUIDs, and are discussed on our mailing lists from time to time. See for example Re: uuid, COMB uuid, distributed farms, Indexes on UUID – Fragmentation Issue or Sequential UUID Generation.

So, how can we improve the situation while keeping as much of the UUID advantages as possible? If we stick to perfectly random UUID values, there’s little we can do. So what if we abandoned the perfect randomness, and instead made the UUIDs a little bit sequential?

Note: This is not an entirely new idea, of course. It’s pretty much what’s described as COMB on the wikipedia UUID page, and closely described by Jimmy Nilsson in The Cost of GUIDs as Primary Keys. MSSQL implements a variant of this as newsequentialid (calling UuidCreateSequential internally). The solution implemented in the sequential-uuids extension and presented here is a variant tailored for PostgreSQL.

For example, a (very) naive UUID generator might generate a 64-bit value from a sequence, and appended additional 64 random bits. Or we might use a 32-bit unix timestamp, and append 96 random bits. Those are steps in the right direction, replacing the random access pattern with a sequential one. But there are a couple of flaws, here.

Firstly, while the values are quite unpredictable (64 random bits make guessing quite hard), quite a bit of information leaks thanks to the sequential part. Either we can determine in what order the values were generated, or when the values were generated. Secondly, perfectly sequential patterns have disadvantages too – for example if you delete historical data, you may end up with quite a bit of wasted space in the index because no new items will be routed to those mostly-empty index pages.

So what sequential-uuids extension does is a bit more elaborate. Instead of generating a perfectly sequential prefix, the value is sequential for a while, but also wraps around once in a while. The wrapping eliminates the predictability (it’s no longer possible to decide in which order two UUIDs were generated or when), and increases the amount of randomness in the UUID (because the prefix is shorter).

When using a sequence (much like nextval), the prefix value increments regularly after a certain number of UUIDs generated, and then eventually wraps around after certain number of blocks. For example we with use 2B prefix (i.e. 64k possible prefixes), incremented after generating 256 UUIDs, which means wrap-around after each 16M generated UUIDs. So the prefix is computed something like this:

and the prefix length depends on block_count. With 64k blocks we only need 2B, leaving the remaining 112 bits random.

For timestamp-based UUID generator, the prefix is incremented regularly, e.g. each 60 seconds (or any arbitrary interval, depending on your application). And after a certain number of such increments, the prefix wraps around and starts from scratch. The prefix formula is similar to the sequence-based one:

With 64k blocks we only need 2B (just like for sequence-based generator), leaving the remaining 112 bits random. And the prefix wrap-around every ~45 days.

The extension implements this as two simple SQL-callable functions:

See the README for more details.

Time for a little benchmark, demonstrating how these sequential UUIDs improve the access patterns. I’ve used a system with a fairly weak storage system (3 x 7200k SATA RAID) – this is intentional, as it makes the I/O pattern change obvious. The test was a very simple INSERT into a table with a single UUID column, with a UNIQUE index on it. And I’ve done in starting with three dataset sizes – small (empty table), medium (fits into RAM) and large (exceds RAM).

And the overall results (transactions per second) in a 4-hour run look like this: 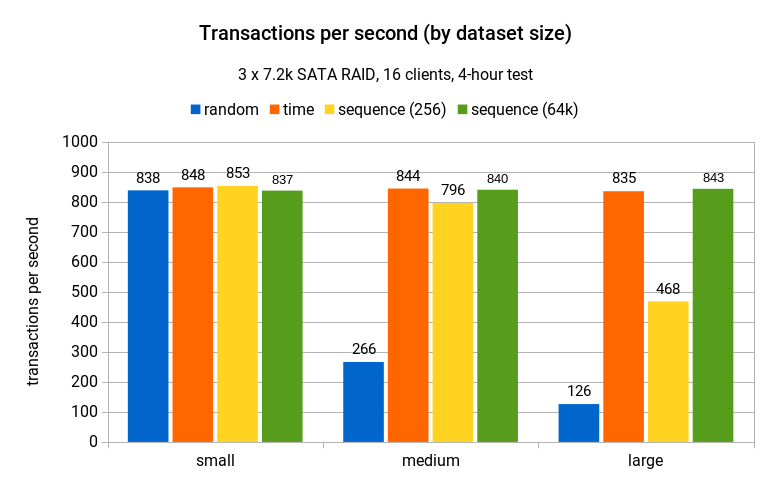 For the small scale there is almost no difference – the data fits into shared buffers (4GB) so there is no I/O trashing due to data being continuously evicted.

For the medium scale (larger than shared buffers, still fits into RAM) this changes quite a bit and the random UUID generator drops to less than 30% of the original throughput, while the other generators pretty much maintain the performance.

And on the largest scale the random UUID generator throughput drops even further, while time and sequence(64k) generators keep the same throughput as on the small scale. The sequence(256) generator drops to about 1/2 the throughput – this happens because it increments the prefix very often and ends up touching far more index pages than sequence(64k), as I’ll show later. But it’s still much faster than random, due to the sequential behavior. 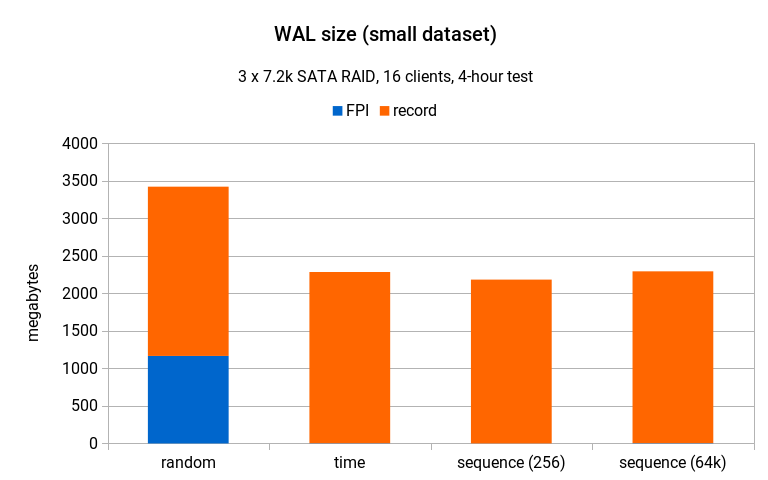 The difference is obvious, although the change in total amount of WAL generated is not huge (and the impact on throughput is negligible, because the dataset fits into shared buffers and so there’s no pressure / forced eviction). While the storage is weak, it handles sequential writes just fine, particularly at this volume (3.5GB over 4 hours).

On the medium scale (where the random throughput dropped to less than 30% compared to the small scale) the difference is much clearer. 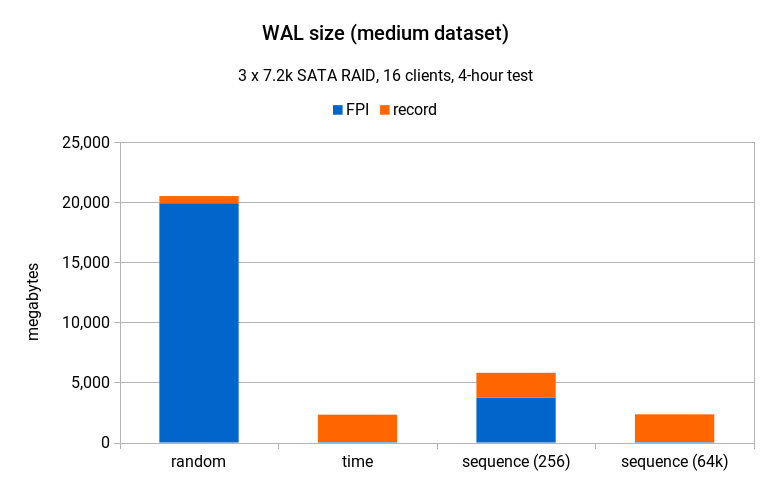 With random generator, the test generated more than 20GB of WAL, vast majority of that due to FPIs. The time and sequence(256) generators produced only about 2.5GB WAL, and sequence(64k) about 5GB.

But wait – this chart is actually quite misleading, because this compares data from tests with very different throughput (260tps vs. 840tps). After scaling the numbers to the same throughput as random, the chart looks like this: 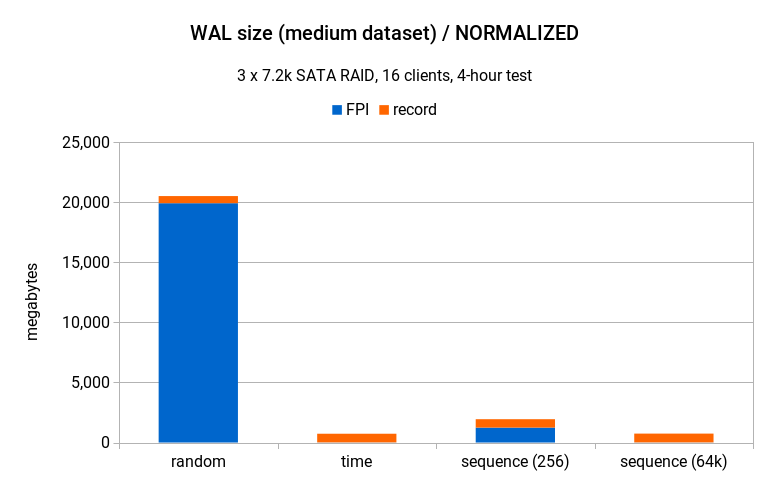 That is – the difference is even more significant, nicely illustrating the WAL write amplification issue with random UUIDs.

On the large data set it looks quite similar to medium scale, although this time the random generator produced less WAL than sequence(256). 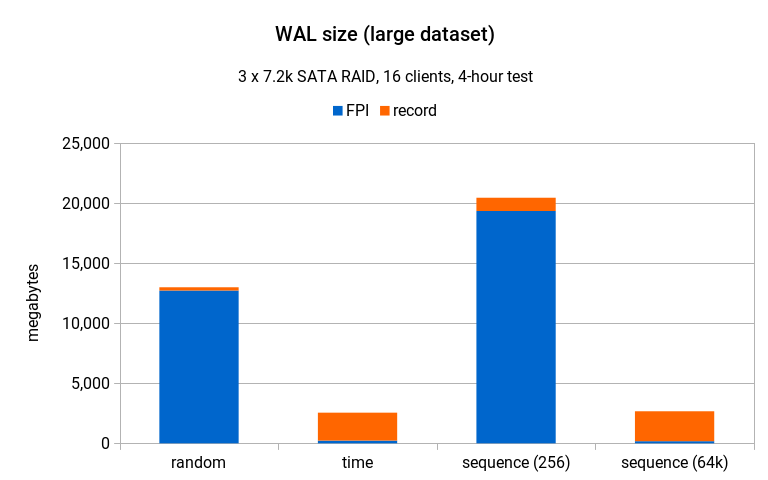 But again, that chart ignores the fact that the different generators have very different throughput (random achieved only about 20% compared to the two other generators), and if we scale it to the same throughput it looks like this: 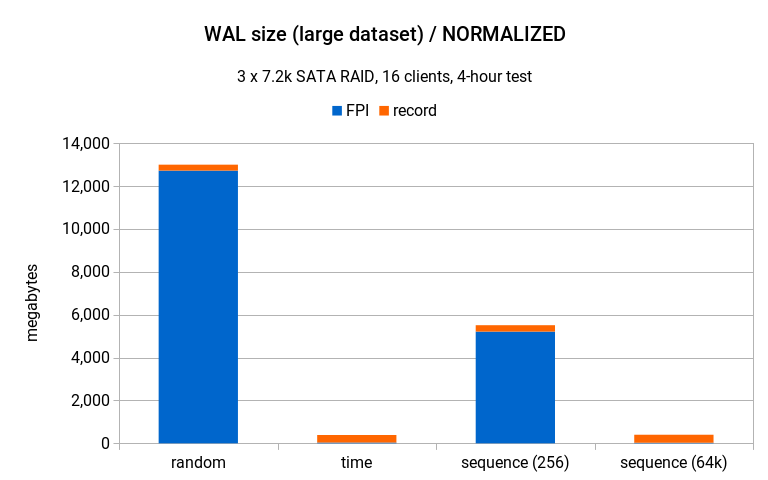 How is possible that sequence(256) produces more WAL compared to the random generator (20GB vs. 13GB), but achieved about 3x the throughput? One reason is that the amount of WAL does not really matter much here – SATA disks handle sequential writes pretty well and 20GB over 4 hours is next to nothing. What matters much more is write pattern for the data files themselves (particularly the index), and that’s much more sequential with sequence(256).

The amount of WAL generated nicely illustrates the write amplification, and impact on write pattern in general. But what about the read access pattern? One metric we can look at is cache hit ratio. For shared buffers, it looks like this: 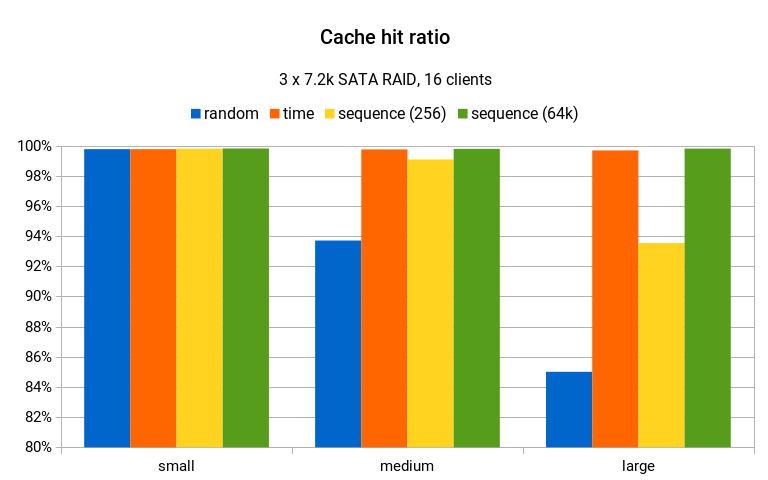 The best-performing generators achieve ~99% cache hit ratio, which is excellent. On the large data set, the random drops to only about 85%, while the sequence(256) keeps about 93% – which is not great, but still much better than 85%.

Another interesting statistics is the number of distinct index blocks mentioned in the WAL stream. On the largest scale it looks like this: 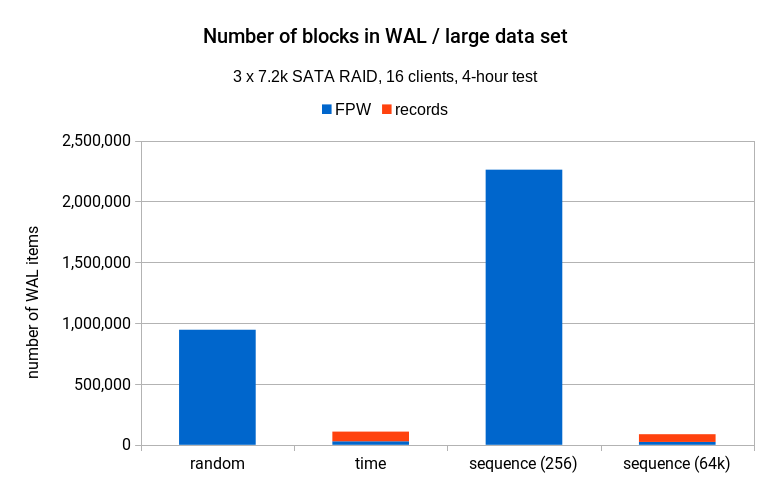 The chart may look a bit surprising, because the sequence(256) generator accesses more than twice the number of distinct blocks than random generator, while achieving 3x the performance at the same time. This may seem surprising at first, but is (again) due to the access pattern being much more sequential with sequence(256).

Both uuid_sequence_nextval and uuid_time_nextval functions have parameters, so it’s natural to ask how to pick the right parameter values. For example, in the tests presented in this post, uuid_sequence_nextval performed much better with block_size set to 64k (compared to 256). So why not to just use 64k all the time?

The answer is – it depends. 64k may work for busier systems, but for others it may be way too high. Moreover, you need to pick both parameters (block size and number of blocks) at the same time. Ask a couple of questions – how often should the generator wrap to 0? How many UUIDs does that mean? Then pick number of blocks high enough to slice the index into sufficiently small chunks, and pick the block size to match the desired wrap interval.

As illustrated by the tests, sequential UUIDs generators significantly reduce the write amplification and make the I/O patterns way more sequential and it may also improve the read access pattern. Will this help your application? Hard to say, you’ll have to give it a try. Chances are your database schema is more complicated and uses various other indexes, so maybe the issues due to UUIDs are fairly negligible in the bigger picture.