I’ve published multiple benchmarks comparing different PostgreSQL versions, as for example the performance archaeology talk (evaluating PostgreSQL 7.4 up to 9.4), and all those benchmark assumed fixed environment (hardware, kernel, …). Which is fine in many cases (e.g. when evaluating performance impact of a patch), but on production those things do change over time – you get hardware upgrades and from time to time you get an update with a new kernel version.

For hardware upgrades (better storage, more RAM, faster CPUs, …), the impact is usually fairly easy to predict, and moreover people generally realize they need to assess the impact by analyzing the bottlenecks on production and perhaps even testing the new hardware first.

But for what about kernel updates? Sadly we usually don’t do much benchmarking in this area. The assumption is mostly that new kernels are better than older ones (faster, more efficient, scale to more CPU cores). But is it really true? And how big is the difference? For example what if you upgrade a kernel from 3.0 to 4.7 – will that affect the performance, and if yes, will the performance improve or not?

I’m aware of a single PostgreSQL benchmark comparing different kernel versions, made in 2014 by Sergey Konoplev in response to recommendations to avoid 3.0 – 3.8 kernels. But that benchmark is fairly old (the last kernel version available ~18 months ago was 3.13, while nowadays we have 3.19 and 4.6), so I’ve decided to run some benchmarks with current kernels (and PostgreSQL 9.6beta1).

With kernel versions, the situation is much less clear. Linux kernel also has branches (e.g. 2.6, 3.0 or 4.7), those are by no means equal to “major versions” from PostgreSQL, as they continue to receive new features and not just bugfixes. I’m not claiming that the PostgreSQL versioning policy is somehow automatically superior, but the consequence is that updating between minor kernel versions may easily significantly affect performance or even introduce bugs (e.g. 3.18.37 suffers by OOM issues due to a such non-bugfix commit).

Of course, distributions realize these risks, and often lock the kernel version and do further testing to weed out new bugs. This post however uses vanilla longterm kernels, as available on www.kernel.org.

There are many benchmarks we might use – this post presents a suite of pgbench tests, i.e. a fairly simple OLTP (TPC-B-like) benchmark. I plan to do additional tests with other benchmark types (particularly DWH/DSS-oriented), and I’ll present them on this blog in the future.

Now, back to the pgbench – when I say “collection of tests” I mean combinations of

The values obviously depend on the hardware used, so let’s see what hardware this round of benchmarks was running on:

So it’s the same machine I’ve used for a number of previous benchmarks – a fairly small machine, not exactly the newest CPU etc. but I believe it’s still a reasonable “small” system.

The benchmark parameters are:

For each combination there were 3 read-only runs (15-minute each) and 3 read-write runs (30-minute each). The actual script driving the benchmark is available here (along with results and other useful data).

Note: If you have significantly different hardware (e.g. rotational drives), you may see very different results. If you have a system that you’d like to test, let me know and I’ll help you with that (assuming I’ll be allowed to publish the results).

As usual, all the data is available on bitbucket, including

The following charts show the average tps for each benchmarked case – the results for the three runs are fairly consistent, with ~2% difference between min and max in most cases.

For the smallest data set, there’s a clear performance drop between 3.4 and 3.10 for all client counts. The results for 16 clients (4x the number of cores) however more than recovers in 3.12. 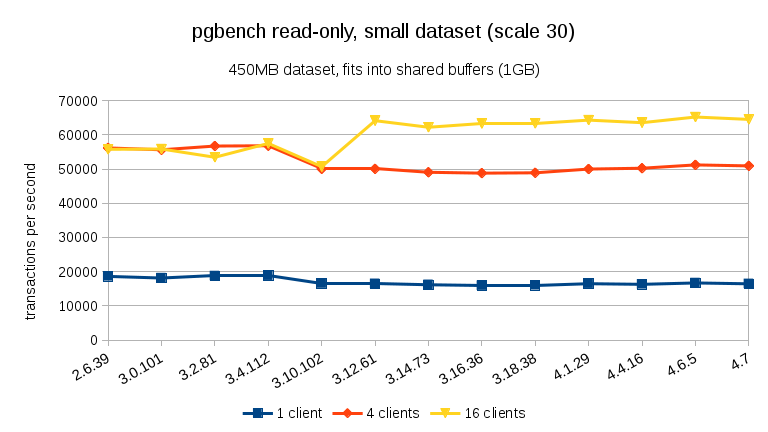 For the medium data set (fits into RAM but not into shared buffers), we can see the same drop between 3.4 and 3.10 but not the recovery in 3.12. 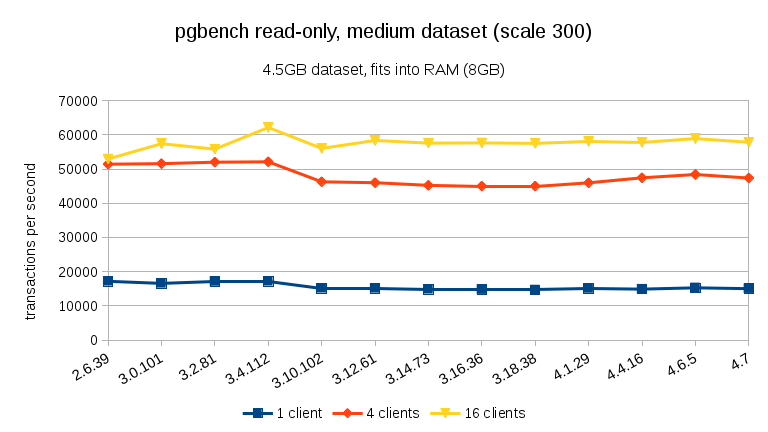 For large data sets (exceeding RAM, so heavily I/O-bound), the results are very different – I’m not sure what happened between 3.10 and 3.12, but the performance improvement (particularly for higher client counts) is quite astonishing. 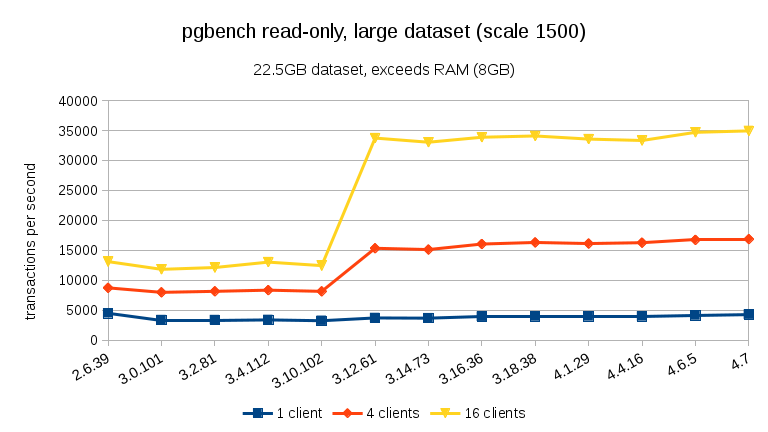 For the read-write workload, the results are fairly similar. For the small and medium data sets we can observe the same ~10% drop between 3.4 and 3.10, but sadly no recovery in 3.12. 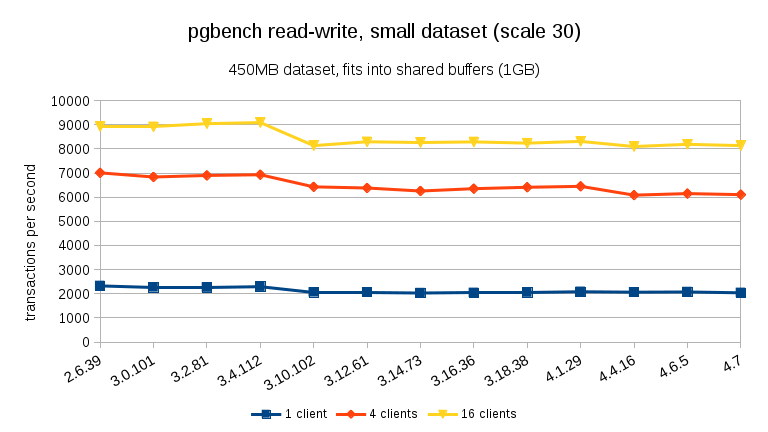 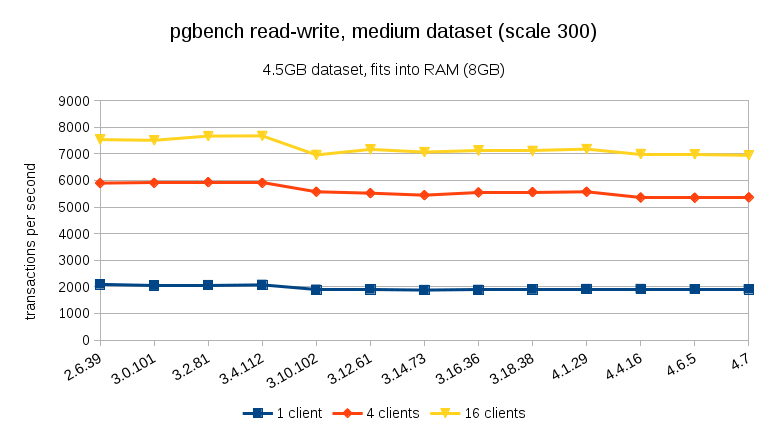 For the large data set (again, significantly I/O bound) we can see similar improvement in 3.12 (not as significant as for the read-only workload, but still significant): 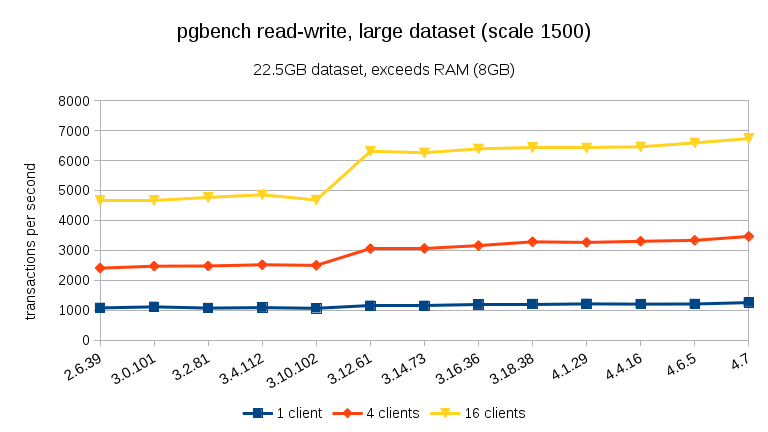 I don’t dare to draw conclusions from a single benchmark on a single machine, but I think it’s safe to say:

As for the reasons why those sudden changes happen, I’m not quite sure. There are many possibly-relevant commits between the versions, but I’m not sure how to identify the correct one without extensive (and time consuming) testing. If you have other ideas (e.g. are aware of such commits), let me know.