I’ve started to write about the tool (pglupgrade) that I developed to perform near-zero downtime automated upgrades of PostgreSQL clusters. In this post, I’ll be talking about the tool and discuss its design details.

You can check the first part of the series here: Near-Zero Downtime Automated Upgrades of PostgreSQL Clusters in Cloud (Part I). 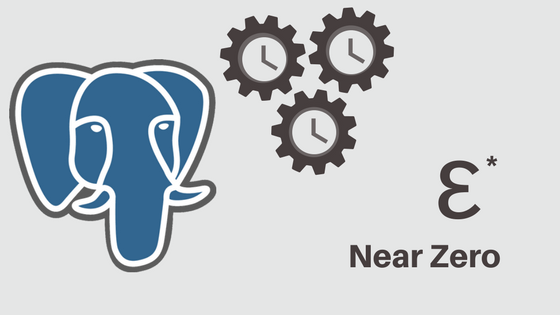 The tool is written in Ansible. I have prior experience of working with Ansible, and I currently work with it in 2ndQuadrant as well, which is why it was a comfortable option for me. That being said, you can implement the minimal downtime upgrade logic, which will be explained later in this post, with your favorite automation tool.

In Ansible, playbooks are the main scripts that are developed to automate the processes such as provisioning cloud instances and upgrading database clusters. Playbooks may contain one or more plays. Playbooks may also contain variables, roles, and handlers if defined.

The tool consists of two main playbooks. The first playbook is provision.yml that automates the process for creating Linux machines in cloud, according to the specifications (This is an optional playbook written only to provision cloud instances and not directly related with the upgrade). The second (and the main) playbook is pglupgrade.yml that automates upgrade process of database clusters.

Pglupgrade playbook has eight plays to orchestrate the upgrade. Each of the plays, use one configuration file (config.yml), perform some tasks on the hosts or host groups that are defined in host inventory file (host.ini).

An inventory file lets Ansible know which servers it needs to connect using SSH, what connection information it requires, and optionally which variables are associated with those servers.  Below you can see a sample inventory file, that has been used to execute automated cluster upgrades for one of the case studies designed for the tool. We will discuss these case studies in upcoming posts of this series.

Pglupgrade tool is designed to give the flexibility in terms of High Availability (HA) properties to the user for the different system requirements. The initial_standbys variable (see config.yml) is the key for designating HA properties of the cluster while the upgrade operation is happening.

For example, if initial_standbys is set to 1 (can be set to any number that cluster capacity allows), that means there will be 1 standby created in the upgraded cluster along with the master before the replication starts. In other words, if you have 4 servers and you set initial_standbys to 1, you will have 1 primary and 1 standby server in the upgraded new version, as well as 1 primary and 1 standby server in the old version.

This option allows to reuse the existing servers while the upgrade is still happening. In the example of 4 servers, the old primary and standby servers can be rebuilt as 2 new standby servers after the replication finishes.

When initial_standbys variable is set to 0, there will be no initial standby servers created in the new cluster before the replication starts.

If the initial_standbys configuration sounds confusing, do not worry. This will be explained better in the next blog post when we discuss two different case studies.

Finally, the configuration file allows specifying old and new server groups. This could be provided in two ways. First, if there is an existing cluster, IP addresses of the servers (can be either bare-metal or virtual servers) should be entered into hosts.ini file by considering desired HA properties while upgrade operation.

The second way is to run provision.yml playbook (this is how I provisioned the cloud instances but you can use your own provisioning scripts or manually provision instances) to provision empty Linux servers in cloud (AWS EC2 instances) and get the IP addresses of the servers into the hosts.ini file. Either way, config.yml will get host information through hosts.ini file.

Workflow of the Upgrade Process

After explaining the configuration file (config.yml) which is used by pglupgrade playbook, we can explain the workflow of the upgrade process. 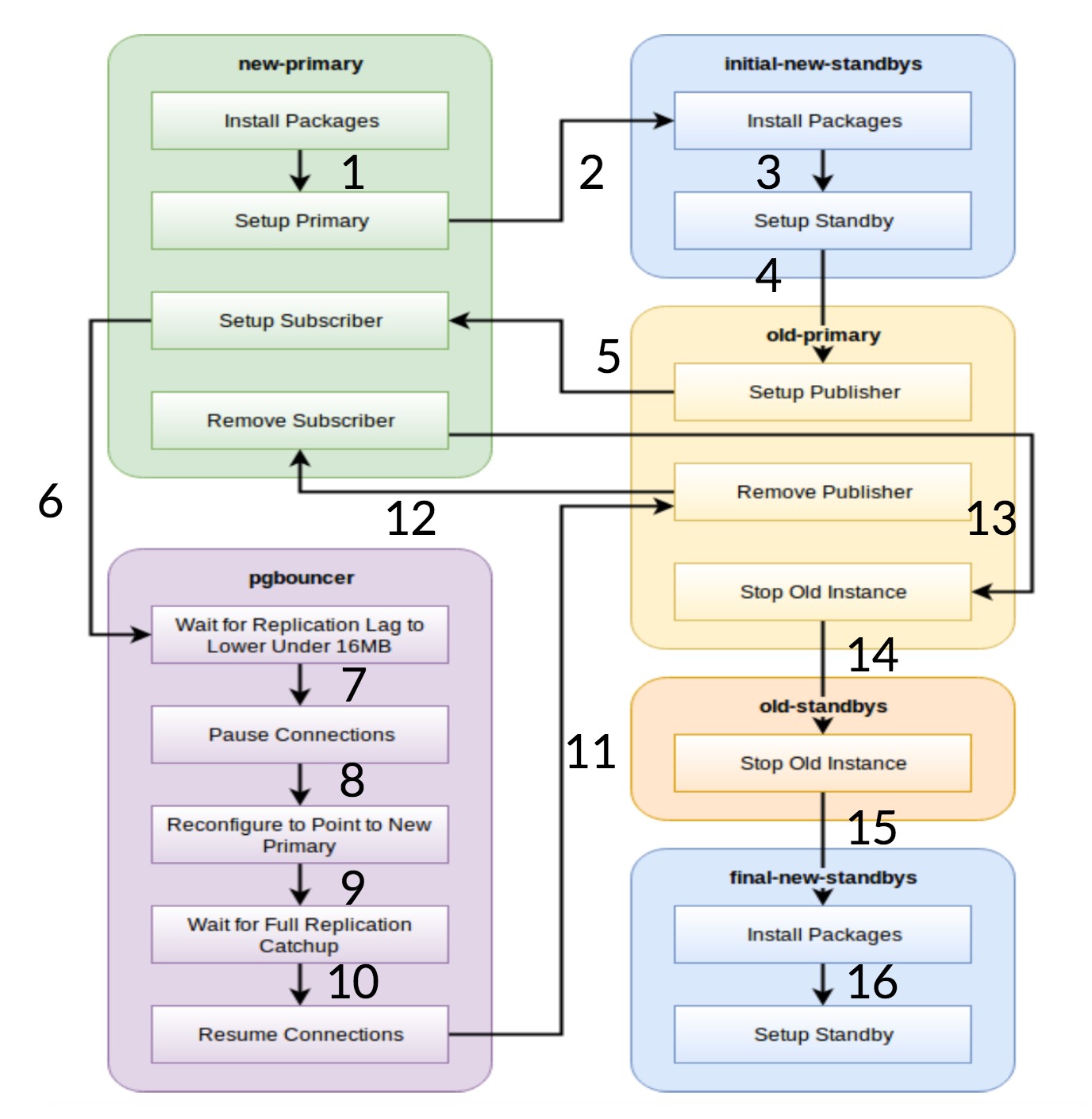 As it is seen from the diagram above, there are six server groups that are generated in the beginning based on the configuration (both hosts.ini and the config.yml). The new-primary and old-primary groups will always have one server, pgbouncer group can have one or more servers and all the standby groups can have zero or more servers in them. Implementation wise, the whole process is split into eight steps. Each step corresponds to a play in the pglupgrade playbook, which performs the required tasks on the assigned host groups. The upgrade process is explained through following plays:

In this post, we discussed the implementation details and the high availability design of the pglupgrade tool. In doing so, we also mentioned a few key concepts of Ansible development (i.e. playbook, inventory and config files) using the tool as an example. We illustrated the workflow of the upgrade process and summarized how each step works with a corresponding play. We will continue to explain pglupgrade by showing case studies in upcoming posts of this series.

2ndQuadrant at PostgresConf US 2018 PG Phriday: BDR Around the Globe
Scroll to top
×