As people have been working on merging Postgres-XL with the PostgreSQL 9.5 branch, I’ve been trying out Postgres-XL’s ability to run a decision support-like workload.  The DBT-3 test kit, originally developed at the OSDL as a TPC-H derivative, has some new changes so that it can run against Postgres-XL.

I’ll describe how to use DBT-3 and what you can expect it to tell you.

DBT-3 is an open source derivative implementation of the TPC Benchmark(™) H, which is a business oriented ad-hoc decision support workload simulating a parts supplier’s data warehouse.  The purpose  of DBT-3 is to help characterize system performance to aid in the development of open source solutions.  In additional to providing a synthetic workload, this test kit gathers database and operating system statistics and generates a report on the system’s performance.

This workload is composed of three tests called the Load Test, Power Test, and Throughput Test.  The kit provides a set of shell scripts to execute these tests, and to make use of the TPC supplied dbgen and qgen programs that generates the table data and queries.

The Load Test measures how long it takes to load data into the database and build indexes.

The Power Test measures an individual’s query processing ability by measure how well a series of twenty-two different queries can be executed.

The Throughput Test measures the system’s ability to process queries issued from multiple users.  In other words, it is the simultaneous execution of multiple Power Tests.

DBT-3 is not just for PostgreSQL or Postgres-XL.  It has scripts for MySQL too.  But I’m just going to talk about the Postgres-XL specific parts here.

These TPC derived test kits are not for the faint of heart but hopefully describing the data that comes out of this test will encourage more testing with large synthetic workloads.

Get the source code

There are currently no easy to use binary distributions so the kit needs to be installed from source.  The source code is available here: http://github.com/mw2q/dbt3

The DBT-3 test kit also relies on an additional set of shell scripts to aid in generating a report in HTML: http://github.com/mw2q/dbttools

For ease of use, I’d recommend installing everything into /usr/local.  Note that while the DBT-3 kit installs scripts to be used for the test, many of the TPC supplied supporting files are not installed with the scripts.

The DBT Tools package uses cmake to create a Makefile.  Prepare and install the scripts like:

Because of the way that the TPC provides the data and query generation programs, the kit needs to be configured for the specific database that it is going to be tested.  Postgres-XL doesn’t require anything more than what the community PostgreSQL requires and the DBT-3 kit already has a patched dbgen to create data files that can be consumed by PostgreSQL.  DBT-3 will install into /usr/local by default.  Prepare, build and install the kit like:

While running a small 1GB test against PostgreSQL should be pretty quick on any of today’s personal computers, Postgres-XL may not quite be as simple to try out on a laptop.  While Postgres-XL is capable of running all of its components on a single system, separate machines (real or virtual) must be used with DBT-3 because of how the test scripts currently impose a particular cluster configuration.

This is how the DBT-3 scripts builds a Postgres-XL cluster.  One system is setup to provide only the GTM Master and Coordinator nodes.  All of the remaining systems provide a Datanode and a GTM Proxy.

In the following examples, we are using 3 virtual machines, named pgxl, pgxl1, and pgxl2.  The unenumerated pgxl will have the GTM Master and Coordinator nodes installed, and pgxl1 and pgxl2 will have their own Datanode and GTM Proxy setup.

We initially used nine separate systems, one for the GTM Master and Coordinator node, and eight systems each with a GTM Proxy and a Datanode.

There are at least a couple other configurations that would be worth investigating:

Setting up the Test environment

The TPC supplied dbgen and qgen programs require environment variables to be set in order to function properly.  For illustrative purposes, we are going to assume that the DBT-3 source code was untarred into /opt/dbt3:

These next set of environment variables are Postgres-XL specific.  The following specifies the details for setting up the system where the GTM Master and Coordinator will be initialized on:

The following specifies the details for the systems where the Datanodes and GTM Proxies will be initialized on:

These sets of environment variables configure the number of datanodes initialized per system:

After setting up the environment variables all that you need to do to run a test is:

When the test is complete, all the data collected will be in /tmp/results and an HTML report will be generated.  You can point your Web browser to /tmp/results/index.html to view it.

Let’s look over some of the details the test report provides, with an 8-node Postgres-XL cluster containing 100GB of data: http://mw2q.github.io/ec2-dnpn1-2s.4/

This test kit is a perpetual work-in-progress and the first thing you may notice is that only hardware details for one of nodes is displayed.  Otherwise, the initial page starts by summarizing the version details from the operating system, database management system version, hardware information and test parameters.

A table of test metrics following displaying the scores for each test.  The Composite value is calculated from the results from the Load, Power and Throughput Tests.  A higher value is better.

The measurement of the Load Test is simply how long the test took to execute, so a lower number is better.

The measurement of the Power Test is geometric mean of the execution time from each of the twenty-two queries.  A higher number is better.

The measurement of the Throughput Test is the ratio of the total number of queries executed over the length of the test.  A higher number is better.

Finally there is a bar chart showing the execution times for each queries in the Power and Throughput Tests.  The Throughput Test numbers are the average of the execution times between all of the streams of queries.  The purpose here it to be able to easily identify which queries might need additional work, whether it be query tuning or something in the database engine. 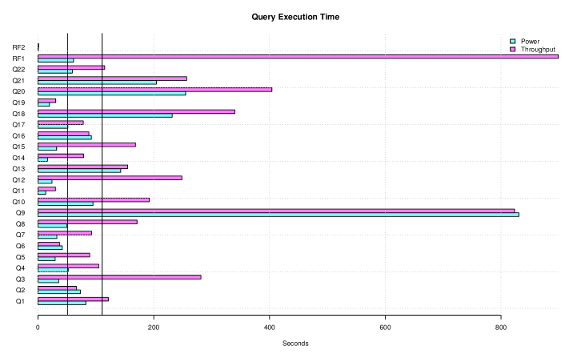 From the initial page there are links to additional system performance details for each of the three tests, and logs from each of the Postgres-XL components.

The Load Test details is really only going to have operating system statistics in the form of charts for processor utilization, i/o, memory, swap and network data.  A set of these charts are created per node in the Postgres-XL cluster.  The test saves the sar test from each node, so while the kit only creates these particular charts, the sar file can be examined later for other statistics.  The detailed database statistics will be lacking, just for the Load Test, because of deficiencies of the scripts to process data that didn’t exist in the first sample.  For instance an index that is created after a table is loaded will not be discovered by the post-processing scripts.

The Power and Throughput Test details presents the same charts as the Load Test details, and also provides plans and query results for each of the generated queries.  The links under the Query Plans and Query Result both report the actual query that is executed.  The Query Plans are only a simple EXPLAIN and I will illustrate later how to get more detailed EXPLAIN output a little further below.

It will be worth mentioning a couple more options to collect even more data before going into how I’ve used this kit.

Getting more from EXPLAIN

If you pass the -e flag to the dbt3-run-workload script, the kit will execute the queries with EXPLAIN (BUFFERS, ANALYZE).  This will change the links to the query results to contain the more detailed EXPLAIN output in place of the query results.

Additionally, if the more detailed EXPLAIN output is captured, an additional script is run during the post-processing to measure plan disasters.

If you pass -Y to the dbt3-run-workload script, Linux perf will collect data for the Load Test.  The Load and Power Test details page will contain additional links at the top of the page to view the profiling reports.  In addition to the report, an annotate source report and traces are provided.

While the Load Test generates a single set of Linux perf reports, the Power Test breaks up the data collection per query, so you can see the profile of the system just for one of the queries at a time.

There is no Linux perf data collected for the Throughput test when using Postgres-XL.  I haven’t come up with a good way to collect data for multiple-node clusters with how the Throughput Test is executed.

The measure of the system’s maximum throughput with this workload is determined by how many streams can be run in the Throughput Test.  That is fairly straightforward to script to test a series a streams and create separate results directories:

This adds an additional flag, -n, to set the number of streams to execute.

Measuring the effects of a database parameter

Let’s say we want to measure the effect of a database parameter like shared_buffers.  Here’s one way to script a series of tests to see what the effects are when shared_buffers is 1, 2, 4, 8, and 16 gigabytes:

This example uses three additional command line arguments that pass the database parameter to the database where -p specifies parameters to use for the Load Test, -q for the Power Test, and -r for the Throughput Test.

In a similar way, additional scripting can be done to format the storage device with the filesystem you want to test, and then execute test with the same parameters.

I hope this helps people who are interesting in using the DBT-3 test kit to get some meaningful data.  Happy testing!