PostgreSQL was presented with the 2019 O’Reilly Open Source Award for Lifetime Achievement in Portland, Oregon, Thursday July 18th during OSCON. I had the honor of accepting that award alongside Bruce Momjian and Christophe Pettus. 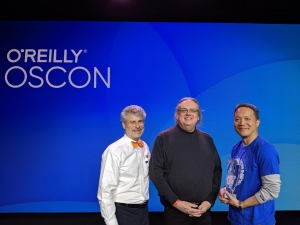 Starting last year in 2018, these awards were presented to projects and the first Lifetime Achievement award was given to Linux. It’s quite a distinction to be recognized second after Linux.

After the ceremony, the award was on display at the PostgreSQL table in the OSCON exhibition hall. Basil Borque, Robert Bernier, and Grant Holly were among several volunteers including Christophe, Michel Pelletier and Tim Bruce who answered questions and made conversations about PostgreSQL during a well attended exhibition. 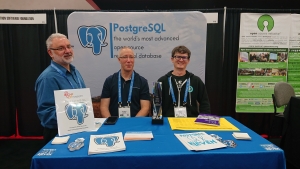 This award was earned by the hard work and dedication from everyone in the community. Everyone should give themselves a pat on the back! 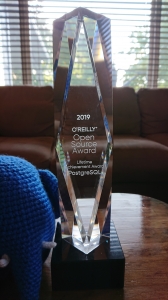