You are here: Home1 / Blog2 / Josette's PlanetPostgreSQL3 / … and now for something completely different!

Up until now, reading this blog has kept you up-to-date with the latest developments in PostgreSQL. This time I would like to invite you to meet the team of 2ndQuadrant at the PostgreSQL Conference Europe 2014 which took place in Madrid on October 21st-24th.

As you know, 2ndQuadrant offers 7 days a week, 24 hours a day support to companies all over the globe. As you can well imagine, to be able to provide this non-stop support we have hired world-class experts who have years of experience and are PostgreSQL contributors, developers or committers. To answer your queries without delay, we needed our team to be scattered around the world. Team members who attended the conference came from Japan, Australia, Chile, Ecuador, Argentina, USA, UK, Germany, France, Italy Estonia and the Czech Republic. Sadly a few could not make it due to personal commitments – they were missed.

What happened in Madrid?

The first day was dedicated to workshops – 2 full-day workshops and 4 half-days. These workshops

Andres Freund – all about BDR

The next day was the opening of the conference. After the welcoming speech, Matt Assey delivered the first keynote: “Not only NoSQL: a case for NoSQL + PostgreSQL in a big data world”. In this talk, Matt intimated that “NoSQL databases like MongoDB are best when paired with a traditional relational database like PostgreSQL”. I am a little confused as I understood that PostgreSQL could outdo MongoDB in criteria such as speed and performance thanks to JSON, and even more efficiently with JSONB. However, I am not a techie and I’ve only written what I’ve understood so far on this matter. Please feel free to comment with your own thoughts about this. 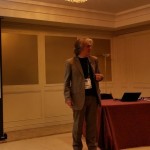 Magnus Hagander from PostgreSQL Europe talked us through the new features of PostgreSQL 9.4 which has just launched. Is it time to update your systems? That is the question. I believe everyone is now working on the next release, which should be due in the autumn of 2015.

I really wanted to sit through Petr Jelinek’s talk on UDR – uni-directional replication – but this year’s conference has boasted the highest number of attendees, which is fantastic but meant that unfortunately some of the rooms were too small to accommodate everybody. Sadly I was one of a number of attendees behind the closed door. Better luck next time!

The number of talks by 2ndQuadrant staff was stunning, demonstrating the expertise of my colleagues:

After all these very technical talks, we need something a little lighter – the lightning talks presented by Harald Amin Massa were just the thing. I was very impressed by the two women whose 5 minute presentations were well received. I hope this inspires other women to come and speak at PostgreSQL conferences. 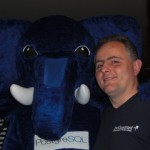 Thursday night was party night! PostgreSQL Europe invited everybody to an Irish pub where beer, wine and soda flowed, accompanied by some great Spanish tapas. This was the occasion to relax and network with fellow attendees. I had a great time talking to Michael Paquier, another French ex-pat living in Japan and a well-read blog writer.

Of course, all good things must come to an end, but not before the announcement came that next year PostgreSQL conference will be held in Vienna, October 27th to 30th. I will be there, will you?