As you may have noted from my previous blog, the last few months were busy in getting Postgres-XL up-to-date with the latest 9.5 release of PostgreSQL. Once we had a reasonably stable version of Postgres-XL 9.5, we shifted our attention to measure performance of this brand new version of Postgres-XL. Our choice of the benchmark is largely influenced by the ongoing work on the AXLE project, funded by the European Union under grant agreement 318633. Since we are using TPC BENCHMARK™ H to measure performance of all other work done under this project, we decided to use the same benchmark for evaluating Postgres-XL. It also suits Postgres-XL because TPC-H tries to measure OLAP workloads, something Postgres-XL should do well.

Once the benchmark was decided, another big challenge was to find right resources for testing. We did not have access to a large cluster of physical machines. So we did what most would do. We decided to use Amazon AWS for setting up the Postgres-XL cluster. AWS offers a wide range of instances, with each instance type offering different compute or IO power.

This page on AWS shows various available instance types, resources available and their pricing for different regions. It must be noted that the prices and availability may vary from region to region, so its important that you check out all regions. Since Postgres-XL requires low latency and high throughput between its components, it’s also important to instantiate all instances in the same region. For our 3TB TPC-H we decided to go for a 16-datanode cluster of i2.xlarge AWS instances. These instances have 4 vCPU, 30GB of RAM, and 800GB of SSD each, sufficient storage for keeping all the distributed tables, replicated tables (which take more space with increasing size of the cluster), the indexes on them and still leaving enough free space in temporary tablespace for CREATE INDEX and other queries.

The benchmark contains 22 queries with a purpose to examine large volumes of data, execute queries with a high degree of complexity and give answers to critical business questions. We would like to note that the complete TPC Benchmark™ H specification deals with variety of tests such as load, power, and throughput tests. For our testing, we have only run individual queries and not the complete test suite. TPC Benchmark™ H is comprised of a set of business queries designed to exercise system functionalities in a manner representative of complex business analysis applications. These queries have been given a realistic context, portraying the activity of a wholesale supplier to help the reader relate intuitively to the components of the benchmark.

The components of the TPC-H database are defined to consist of eight separate and individual tables (the Base Tables). The relationships between columns of these tables are illustrated in the following diagram. 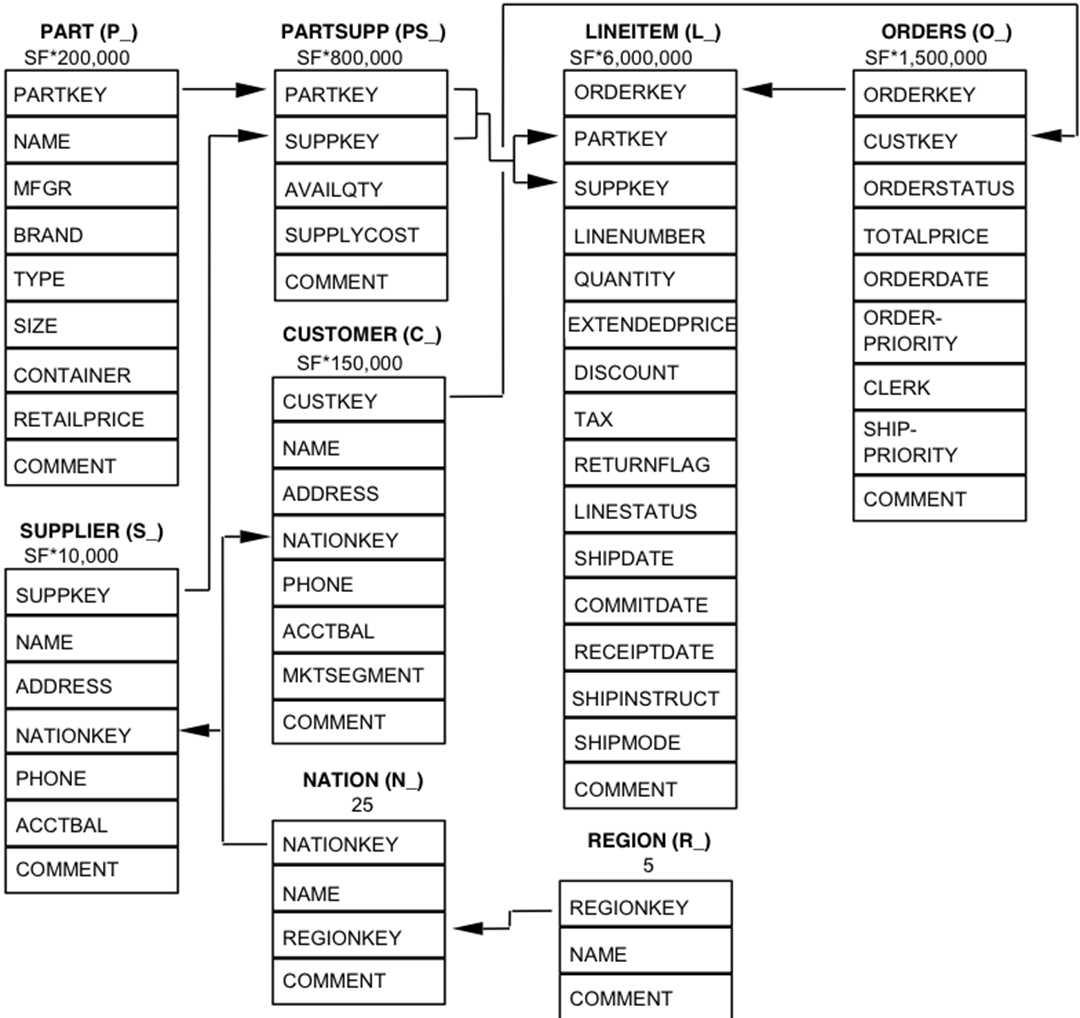 Note that LINEITEM and ORDERS which are the largest tables in the benchmark are often joined on the ORDERKEY. So it makes a lot of sense to collocate these tables on the ORDERKEY. Similarly, PART and PARTSUPP are frequently joined on PARTKEY and hence they are collocated on the PARTKEY column. Rest of the tables are replicated to ensure that they can be joined locally, when needed.

We compared results obtained by running a 3TB TPC-H Load Test on PostgreSQL 9.6 against the 16-node Postgres-XL cluster. The following charts demonstrate the performance characteristics of Postgres-XL. 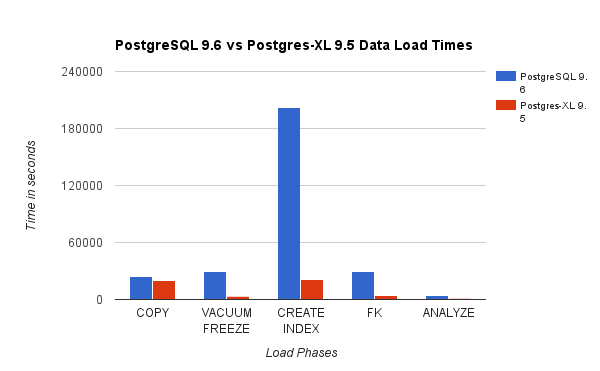 The above chart shows the time taken to complete various phases of a Load Test with PostgreSQL and Postgres-XL. As seen, Postgres-XL performs slightly better for COPY and does a lot better for all other cases. Note: We observed that the coordinator requires a lot of compute power during the COPY phase, especially when more than one COPY streams are running concurrently. To address that, the coordinator was run on a compute optimised AWS instance with 16 vCPU. Alternatively, we could have also run multiple coordinators and distribute compute load between them.

We also compared the query run times for 3TB benchmark on PostgreSQL 9.6 and Postgres-XL 9.5. The following chart shows performance characteristics of the query execution on the two setups. 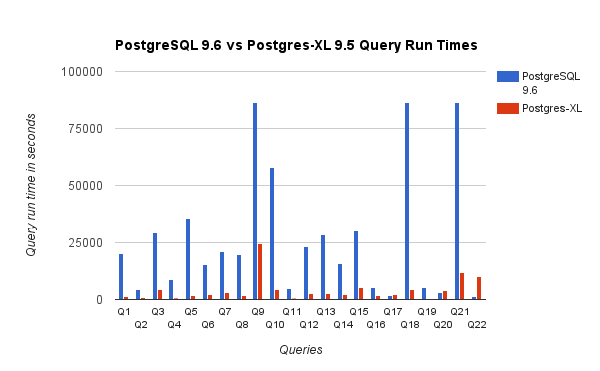 We observed that on average queries ran about 6.4 times faster on Postgres-XL and at least 25% of the queries showed almost linear improvement in performance, in other words they performed nearly 16 times faster on this 16-node Postgres-XL cluster. Furthermore at least 50% of the queries showed 10 times improvement in performance. We further analysed the query performances and concluded that queries that are well partitioned across all available datanodes, such that, there is minimal exchange of data between nodes and without repeated remote execution calls, scale very well in Postgres-XL. Such queries typically have a Remote Subquery Scan node at the top and the subtree under the node is executed on one or more nodes in parallel. Its also common to have some other nodes such as a Limit node or an Aggregate node on top of the Remote Subquery Scan node. Even such queries perform very well on Postgres-XL. Query Q1 is an example of a query that should scale very well with Postgres-XL. On the other hand, queries that require lots of exchange of tuples between datanode-datanode and/or coordinator-datanode may not do well in Postgres-XL. Similarly, queries that require many cross node connections, may also show poor performance. For example, you will notice that the performance of Q22 is bad as compared to a single node PostgreSQL server. When we analysed the query plan for Q22, we observed that there are three levels of nested Remote Subquery Scan nodes in the query plan, where each node opens equal number of connections to the datanodes. Further, the Nest Loop Anti Join has an inner relation with a top level Remote Subquery Scan node and hence for every tuple of the outer relation it has to execute a remote subquery. This results in poor performance of query execution.

While benchmarking Postgres-XL we learnt a few lessons about using AWS. We thought they will be useful for anyone who is looking to use/test Postgres-XL on AWS.

We are able to show, through various benchmarks, that Postgres-XL can scale really well for a large set of real world, complex queries. These benchmarks help us demonstrate Postgres-XL’s capability as an effective solution for OLAP workloads. Our experiments also show that there are some performance issues with Postgres-XL, especially for very large clusters and when the planner makes a bad choice of a plan. We also observed that when there are very large number of concurrent connections to a datanode, performance worsens. We will continue to work on these performance problems. We would also like to test Postgres-XL’s capability as an OLTP solution by using appropriate workloads.

How to find out which PostgreSQL table a file on disk corresponds to Announcing Barman 1.5.1
Scroll to top
×